Exhibit of the Lifework of Puppeteer Zsolt Szász

A puppet exhibit featuring highlights from the lifework of the Géza Blattner Award-winning puppet artist Zsolt Szász opened on 17 September on the third storey of the National Theatre’s public space. On the same day, an exhibition of production photos by the theatre’s photographer Zsolt Eöri-Szabó opened on the first and second storeys. The two exhibitions were open to the public until 16 October, and were introduced on 27 September by Kossuth Prize-winning performer, folk singer and story teller András Berecz. From this point on, we shall concentrate on the puppet exhibit.

Zsolt Szász gazed into the deep well of time and captured the essence of puppetry by entitling his exhibit ‘Puppets Don’t Cry’. Puppets do not cry, just as the angels do not cry, and neither do gods. Puppets are not allowed to cry; for, in the cult ceremonies of ancient civilizations, they represented God or gods. That is, they themselves were gods. Zsolt Szász harkens back to the Grand Narrative, seeking out grand tales, because he believes in the truth of recounting stories. The best of the old Czech masters would praise his puppets if they could see this exhibit. Where does Zsolt Szász’ value as a creator lie? I have been to a number of puppet exhibitions where, observing the mechanical puppets in display cases, I felt something was missing. I could not fully appreciate these beings as a whole. As Martin Heidegger wrote about paintings and statues on display, ‘[they are] divorced from their sphere of Being’ and ‘placed in a collection, they are deprived of their World’ (Heidegger 1988, 67). In relation to the puppets, their sphere of Being is the theatrical performance. Depriving them of their World results in the loss of their identity, since they are unable to move, and they are not in service to a play. Because the puppets are displayed here together with their sticks and string, their functionality is striking. Given the figures’ mechanical features, we sense an opportunity to unlock this particular World. It preserves their nature – i.e., the puppets’ potential to move and perform. Nevertheless, Zsolt Szász’ creations call our attention to another world – one that no longer exists – by not hiding from the viewer either the marionette’s crossed sticks or the wooden rods typical of Javanese wayang puppetry. Observing the puppets, we feel as though they have just stopped, that they will continue and resume the performance. However, in order to divine their identities, we do not necessarily need the puppets to move. For the lifeless material to come to life, we need only know the story, because the puppets are present in their historic sense. They are tied to the ancient narrative in which they were born. This makes them authentic and remarkably topical. They are of this world, linked to the given culture as a whole. Besides the choice of theme and texture of the fabric, the wood’s subtle carving, the presence of folk symbols, and the tiny signs on the clothing, lending them an old appearance – all strengthen the puppets’ link to their narratives. Nonetheless, they appear to us not merely as preserved, traditional objects. After all, they are broken in, puppets that have weathered performances and are ready to recount their tales again at any time. With regard to the exhibit, a critic could remark that ‘it is lifeless material brought to life’, which is the definition of puppetry in current use. Still, that is flawed, since it focuses solely on the movement and momentum, ignoring the fact that the puppet figures are rooted in a story as well. Can we honestly remark that any puppet figure of László the Valiant is dead material that needs to be revived? László the Valiant does not need to be brought to life; he already lives. He exists. We know him, and know his tales. We could say the same of the devil, too, as well as all puppet effigies representing archetypes.

Although we may not have seen Zsolt Szász’ puppets, they strike us as familiar. We sense in them the long forgotten story. Most designers rely on workshops for the puppets’ execution. Zsolt Szász, who works with natural materials, not only designs his puppets, but makes them as well (carving them, dressing them and supplying the mechanics). Henrik Kemény worked similarly, as did his master František Vítek. Zsolt Szász forces Hungarians less versed in their cultural past to reflect. Certainly, they would like to learn from the puppets, to be reminded who they are. We know that the goal of theatre is not to cultivate tradition, but to present it, make it current and fill it with life. Vilmos Diószegi, an Eastern scholar, wrote: ‘Folk poetry is like layers of coal in the depths of the earth. The layers, stacked on top of one another, faithfully preserve traces of olden times’ (Diószegi 1998, 4). Our puppet artist recognized this, and his work exposes and uncovers ever newer layers. 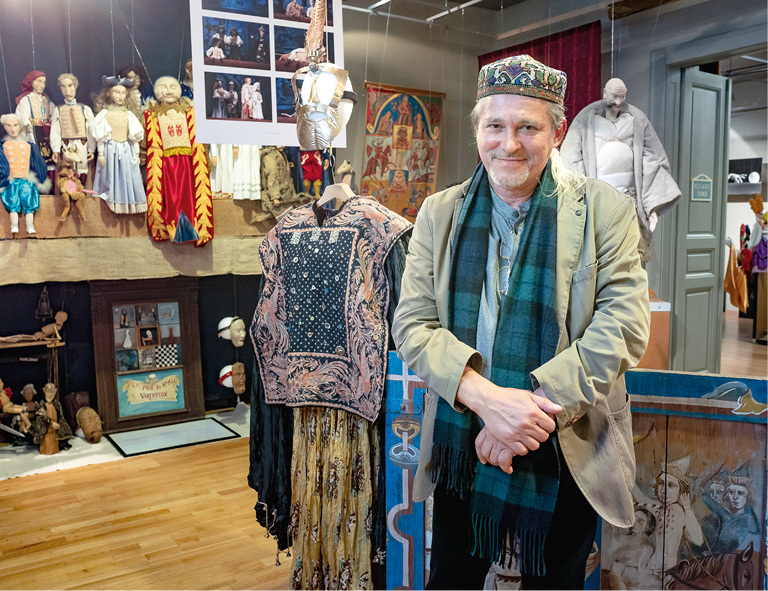 Zsolt Szász burst onto the puppetry scene in 1998, as a performer in the production entitled Bluebeard the Knight; or, the Female Tyrant. That is when he founded his puppet theatre with the telling name Prolihystrió. [A portmanteau of common man and Renaissance man – trans.] Later, he created the no less tellingly named Mystery and Gravitation Theatre Company and later the Royal Hungarian Puppet Theatre formation. (Visitors to the exhibit can view on the monitor the production of The Tale of Saint László that he created for Swan Song Theatre in 2000.) Meanwhile, Zsolt Szász also designed contemporary shows at permanent theatres as well. As an artistic product of his meeting of the minds with Gábor Papp, he presented his folk-tale adaptation The Beautifully Singing Pelican in Debrecen. He also designed and directed shows in Pécs (Master of Wind and Mistress of Rain, Japanese Tales and Parsifal, the Foolish Knight), Kecskemét (Thyl Ulenspiegel) and Szombathely (The Garden of Wonders). Showing his affinity for Eastern theatre, he often used bunraku-style puppets – for example in The Talisman (Csokonai Theatre, Debrecen) and Japanese Tales.

From 1993, he was artistic director of the Winged Dragon International Street Theatre and Puppet Festival for 20 years. He organized the International Nativity Meeting with Márta Tömöry for 30 years. From 2006 to 2012, he worked at the Csokonai Theatre in Debrecen. Since 2013, he has served as dramaturge at the National Theatre and editor-in-chief of the journal entitled Scenarium. 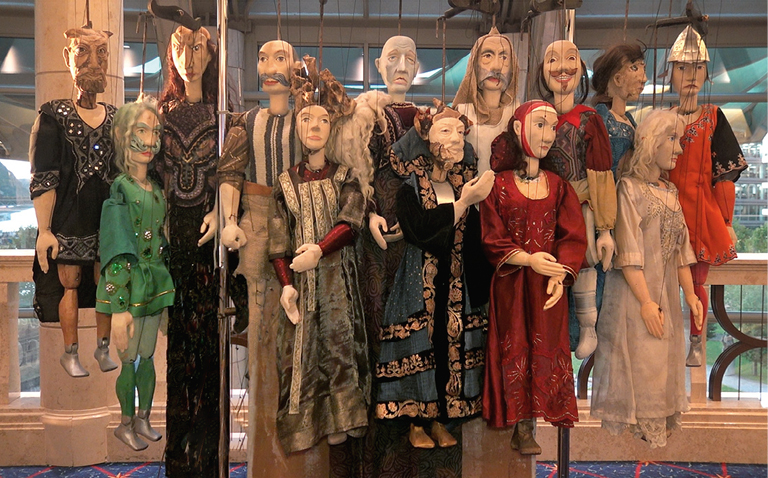 It makes one wonder how a distinguish expert on puppets (by international standards as well) has never found a lasting home in any puppet theatre in Hungary. The puppetry community can only thank the National Theatre for providing a venue for this exhibition during MITEM (The Madách International Theatre Meeting). The exhibit itself is certainly suited to the philosophy and artistic calibre of this event.

For the preservation of the Hungarian race, its social welfare and successful future, the only path is through outstanding education and research…

The leadership of the University of Theatre and Film Arts, in harmony with the goals set down in its founding document in the course of the university system’s restructuring, is committed to raising interest in the institution’s students, instructors and researchers by achieving and promoting results, both artistic and scholarly, that showcase the values of universal and natural culture. With the establishment of the peer-reviewed, interdisciplinary journal Urania, released each semester and made readily available, the time has come for our colleagues to make their artistic and scholastic statements public on their own published platform – as it is done at similar universities. The goal of the journal is to fill a central role in bringing to light research and publications that integrate theatre, film and media studies within the country and internationally.

As we wish to provide a forum for the authors, our paramount goal is to strengthen, in our country’s scholarly community, the existence of a dialogue in scholarly and artistic areas that defines our national culture. Moreover, by these means, we wish to offer our readers alternatives to prejudices and ingrained ideas related to these themes.